This is the Blender collaboration 2021, week 8 challenge. Don’t be afraid to join, a lot of us are beginners. This is all to practice, to have fun, to learn, and get together.

This week’s subject is “At the museum”.

You create whatever object or scene or whatever you can think of that has something to do with the subject. It can be as simple or complicated as you want, all entries are welcome!
Post your picture here in this thread. And at the end of the week, we start to vote. And if you are the winner, you may choose the next subject.

Just to inspire you, my final concept. I Will not work on this. Busy doing the 2D drawing course, so I can sketch my 3D designs upfront. Have fun. 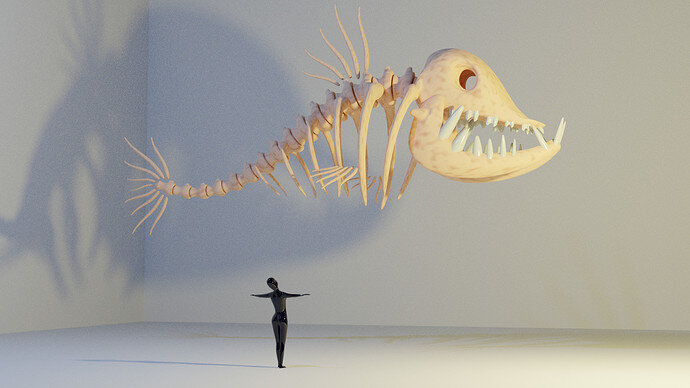 Here is my entry. Final and sole submission. Partialy inspired by Lupin the III.
There are things I could have done better… If something you want to share to entice me to improve myself - I welcome it. 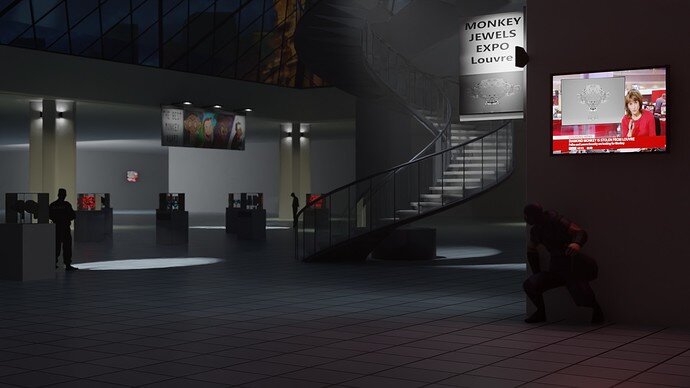 That is the end point of the challanges - think outside the box… let your imagination guide you and then - fullfill your imagination into solid project. Have a goal and find ways to forfill it.
It prepares you for the idustry demands.

For me, it was a “find Waldo” illustration.

I rarely zoom in on the visuals send in.Because I see a lot

So the details in the story told here, are difficult to see on my (dark) monitor. The exposed parts at the right side, pulled my eyes while the left side was dark, uninteresting.
But because it is Marijus, who has seemingly a lot of experience. I decided to zoom in and inspect it better. This is where this story unfolds its self.

At first sight, it is difficult to see figures (police and thief) and give them a purpose. I thought they were just museum visitors.
“At the museum” viewers expect to see a museum (people in fancy clothes) and not a very dark (on my monitor) scene. Which fits nicely, when the told story is clear to you.

As a crime scene I would expect to see all lights on, maybe ribbons to mark to crime spot. Maybe some police cars on top of the roof.

It’s all a matter of perception.

As a crime scene I would expect to see all lights on, maybe ribbons to mark to crime spot. Maybe some police cars on top of the roof.

Agreed. Technically and creatively (I really like monkey theme) it’s awesome. Story is a bit inconsistent. I like the little detail on the TV reporting the crime, but the scene made me think that this is before stealing the jewels - it’s too calm and drowsy.

However, the added story has some logic failures for me. Ok we can ignore that by the time the theft was on the news the thief would be long gone and as FedPete mentions be more a crime scene, because that screen really just points out the story.
But the thief at least ought to be looking to be going away from where the exbibit was stolen from. Currently he looks like he is trying to find a way up and in rather than out.
Perhaps an extra showcase centrally, that he can be hiding behind and a fire exit door below the tv? That he is waiting the chance to get to unseen? Possibly propped open by a fire extinguisher from his entry earlier?

Hi,
I’m not sure I am the most experienced here as I don’t know others that well. I can help imporve bringing 2D drawing into 3D, but that’s a very narrow experience (I work with Architects to bring their 2D drawings into 3D visualization). There are talents in this group that surpass me in certain skills that I personally lack. Sticking a stencil instead of creating a character is my way to cut corners, because of my lack of creative skills and pressure to deliver a project.
You are right on image being too dark. I’ll resubmit better version (for experience of improving, not necceseraly for votes), that will take all feedback into account.
I’ve posted. because I recognized main two points I’ve reached and needed help with (I urge everyone in this community to do the same):

I’ll resubmit better version (for experience of improving, not necceseraly for votes),

It is no problem to show improved versions. The last entry will be used in the vote.

I’m about to start learning Sketchup and Twinmotion, so this might be my last post here. If my future workflow includes Blender (I’ve honestly no idea at the moment), I’ll definitely be back, but just in case I’d like to say thanks to everyone for all the tips and encouragement over the recent months. Good luck. 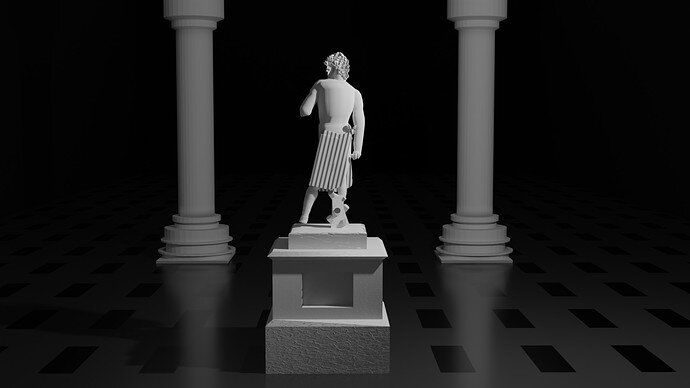 @Leon_V2 Nice choice of topic. And good luck with your new endeavours

@Marijus Love the architecture in your entry, the stairs, glass wall. Fabulous!

Here’s my entry:
(Warning: I am too impatient when it comes to animating properly ^^) 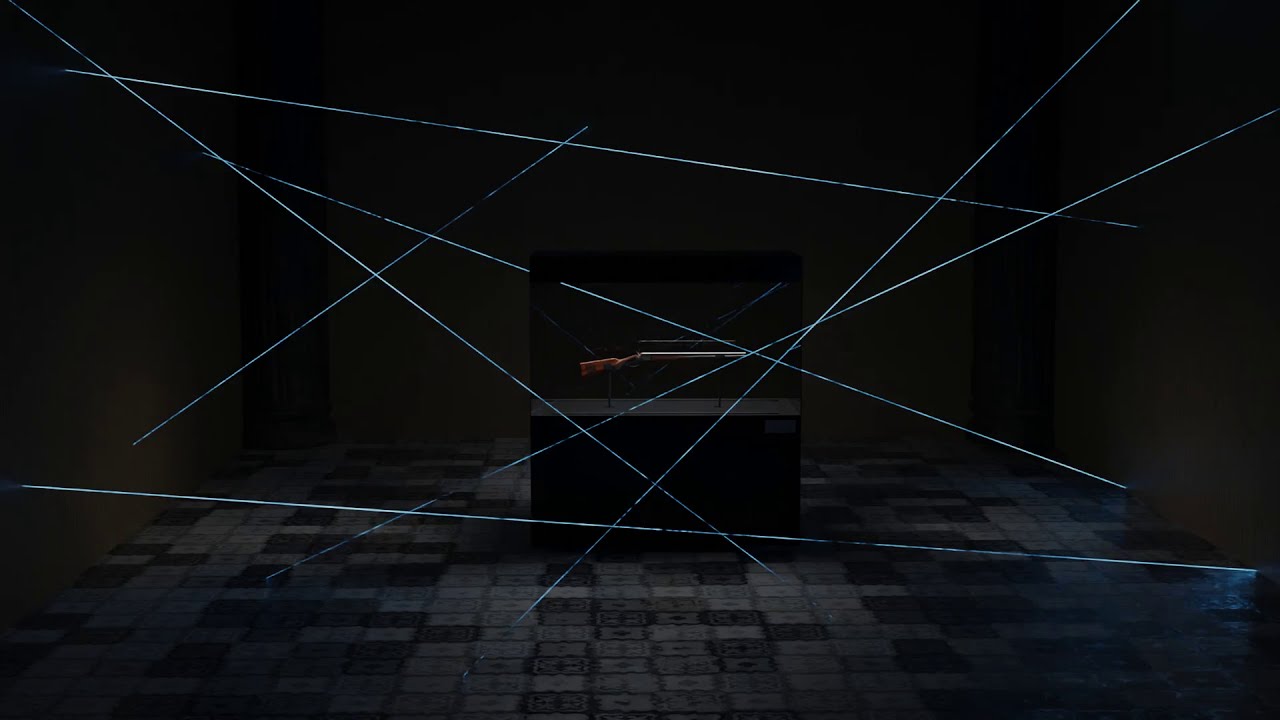 I had already modeled the rifle last week. Now I decided to finish and use this model in my entry. I textured the rifle in Substance Painter, trying at the same time to learn that software (it is free for students! :D) Other than that, getting the lasers just right was definitely the biggest challenge! 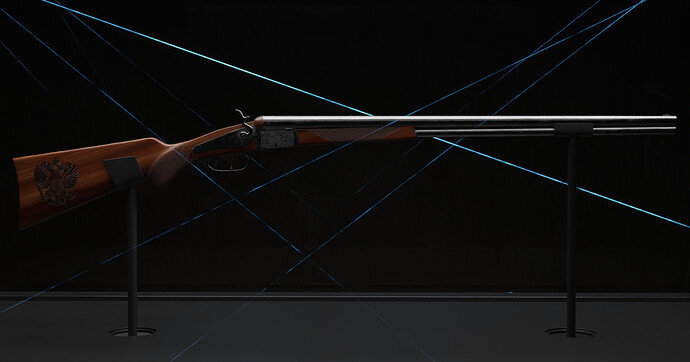 Please let me know what you think about it

Sorry, to lose you for a couple of study months. We all choose our paths. I hope you will find what you are looking for. I wish you all the best.

Is there any rule against using other software than Blender?

Please let me know what you think about it

It looks awesome. I would make the wood more worn out. It looks like it’s an old rifle, but it has “freshly” looking wood (and the metal is a bit worn out).

Edit: I recently seen this on artstation. It’s maybe a bit too much of damage for museum (someone would surely clean and polish it before putting it there), but there is middle ground somewhere

Great preview, got some ideas, you too I think.

The wooden shoulder part of the gun has harsh edges, I think it needs to be more oval-shaped at the shoulder area.

So the gun is heavily guarded. but whats makes it so valuable …?
And valuable pieces like this should have more attention values, like spotlights, etc.
I know you lose your fancy laserbeams … but then, most of the designing process is “Kil your darlings”

@bOBaN You are right, the wood should be a bit more worn out to make sense with the metal and museum! Thanks for the tip!

@FedPete Sorry I don’t quite know what you mean with the shoulder?
As for it’s value… there could be many reasons. What makes anything valuable really? Something’s rarity? Story? I thought I’d leave it open to the viewer’s imagination ^^
There are no more spotlights because the scene is at night. No visitors at that time.

Difficult to explain, you did an oval to place the shoulder in.
but I mean an oval in the length of the weapon.
Which solves the problem of the hard edge/rim.

See the glossy reflection of the example. 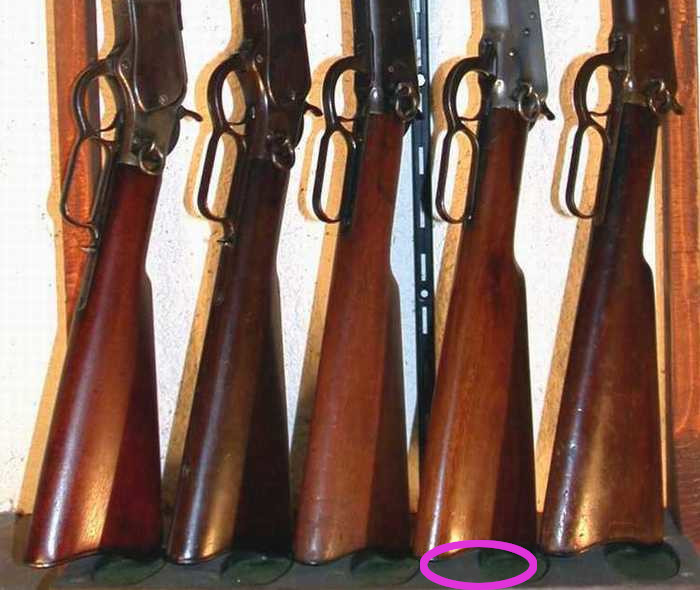 True, but still you need to guide the viewer a bit. Like a plate “With this gun Texas Bill has been killed”.

image1300×360 54.5 KB
This image was my reference for the rifle. You mean the oval is not… round enough? Because the edges here are pretty sharp too.

As for the “guiding the viewer”, you are probably right. I guess my scene only makes sense, if there was a movie built around it where one would learn about the rifle’s importance. There’s actually a plate in it, but because it’s dark (-> night) and realisticly small, it’s nearly invisible. ^^