[Update: Because I forgot something like I usually do. Added My Picture Frame Pictures]

So my silent film is done. I promised myself that I would follow the course as exact as possible and not get detoured. Tried as I might, close to a month later I ended up with an animation almost 10 times longer than asked for (2730 frames rather than 300), but worth every extra second, day, week…month…but not year!

I managed to get both an Evee and Cycles version working. The evee took about 30 minutes to render. The cycles, at 16 samples with denoise to between 7-9 hours. I ran most of it through during the cold of night while I was asleep rather than the heat of day.

What I propose to do first is post the progression of the little films development, then show the two videos. This post will act as a summary to all my posts in this section.

10.[Update]- Picture Frame Pictures: all were drawn or developed by me (two from this course, two from an art course) except the hands of Adam and God from the Sistine Chapel. Those I edited to look like they were sketched. 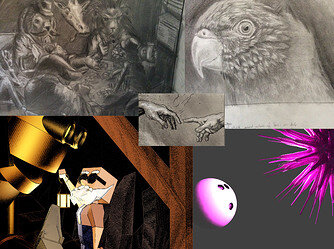 At the end, did I see the S.O and start of the second S from the lamp on the floor using Morse code?
If so, I think that’s the best little detail in the whole short film. Very well done though, nice animation for sure.

At the end, did I see the S.O and start of the second S

You know, @Digitz, that clever use of the light never crossed my mind, Good thinking

If it actually turned out to be the S.O.S, it would be a very happy accident

I will have to keep that in mind if I ever expand on this piece in the future (mainly adding sound and music).

It sure does look like a happy accident then.

I guess we have to wait a while for the sequel ‘the rescue’!
Nice work on the sketches too.

Can’t wait to see how far you take the next section!

So much work!
Well done, a great learning journey.
Eevee have won (for me).

Only 30 minutes or so of rendering for Eevee. I looked up a few things to help get that light to come through the mesh, which really was not as hard once it came down to it: Go to the Render properties, Click on the right thing, and away you go.

Then I added in two spot lights for each lamp- One to get the main lighting effect, the other to light of the “Nozzle” of each lamp and bring out some extra light.

My first contention with the Eevee was that the scene was too bright for my liking. I was going for a “dark room” look, so I should have mucked around with the setting a little more. My second was that the video quality suddenly dropped after a few seconds after pressing play. I do not know if that was my problem alone, or if it was in general. If in general, how does anyone know how to fix that?

I considered doing a Cycles rendering at 200, but that would have taken a few days I am sure. 500 frames were taking at least 1.4 hours at 10 second per frame at my mentioned setting. But in the middle of the animation it was taking up to 13 or 14 seconds, which is about 2 hours. It averaged about 8 hrs I think. But at 200? Then with the denoise? It would be at least 1 minute and 40 seconds per frame at its fastest: making it over 13 hours/500 frames- making it almost a full 76 hours, but up to 125 hours… something I do not know if my computer would like very much

Eevee have won (for me).

To tell you the truth, I kind of like the “painterly” look of the lower end cycles. I saw some video’s of a 2d artist that discovered the grease pencil in blender, and has been making 3d/2d art and animations with it. A neat combination in my mind- I used to focus on traditional 2d art, mainly pencil and some painting, and software (bitmap painting mostly). I was also enthralled with traditional 2d animation at that time- so the thought of creating 2d animations in 3d is an appealing proposal

All I have to do now is wait for the e-paper technology to catch up, then we can have painted looking portraits that actually move and you can interact with

I guess we have to wait a while for the sequel ‘the rescue’!

Maybe? I could add the much needed plug in cords that are missing from these lamps. Unless they run off of battery power? But if I have an extension cord, it might be easier to enact a rescue

The view would be focused on the floor and the desk, looking up, but with the fallen lamp in view. That way I could have the droop lamp move in and out of view with new items for the rescue.

There the seed is set!

I think with the length especially, the static camera with no cuts to different angles was missing from the first episode, so a change to seeing the site of the fallen lamp would be good. You could cut to the top views to see the droop lamp getting a cable or pulling on one.

I suppose I will have to learn how to do separate cameras. But I do not think that would be too difficult? Using the video editing and cutting and pasting different scenes in that editor seems the way to do it.

Assuming you render to pngs, I expect so, you can render clips and join them together, FedPete will know how! Not something I have played with.

You can also animate the camera. Frame 1…50 on position ‘A’, frame 51…100 on position ‘B’.
Then Blender has also the option of creating multiple scenes in one .blend file. Same animation, but different camera viewpoints.

Generate videos (.mpg) and edit them in Blender or Adobe Premiere, or ‘Resolve’(free). Remember videos are compressed, loss of image quality. Better render to images, with a cost a lot of disk space. But high-quality source material.

You can also animate the camera. Frame 1…50 on position ‘A’, frame 51…100 on position ‘B’.
Then Blender has also the option of creating multiple scenes in one .blend file . Same animation, but different camera viewpoints.

That makes sense: same scenes and different camera’s, or multiple scenes with their own cameras. This does not step out of the scope of what we have learned. The only difference is the application of it.