I tried doing this on an old environmental test project and the blueprint data for the GetPlayer nodes seemed to be wrong but in a UE5 test project, it seems to have worked great. Aside from my rough cinematography skills, of course (suggestions welcome!). I tweaked keyframes in the rail camera, and it’s a lot better than when I tried 360º. I don’t recommend that.

I would have targeted the player rather than the platform but how can you target something that’s not there yet?

You should be able to update the camera target with a little bit of Blueprint when the player spawns.

Okay, I ditched the rail cam because…

But most importantly, I screwed something up so bad with the last camera trying to get the blueprint to target the player that I couldn’t fix it. It was so weird, it would focus on the player the first time and then not on the next attempt. These were different plays, it wasn’t the “DoOnce” node. So I nuked it all and those elements were all tied together so Unreal really didn’t like this idea. I even had to restart the editor and re-delete the things in outliner because they only greyed out with the first attempt.

Strangely, I set it all up again with this crane and it seems to be working fine. So, YAY!

So now why are they popping into the sky when I step on the trigger?
@David_Barlow_Davido0 had a good post about this…
Are my settings correct? 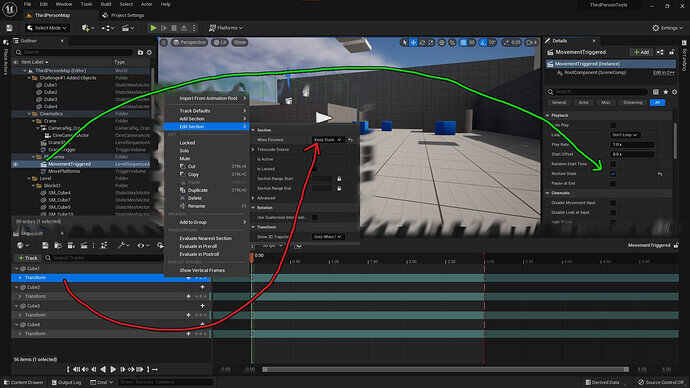 Next lesson is to set up a puzzle. So rather than a trigger box, I need an interface. hmm.
Okay, what if you have to push one of those boxes up the ramp? The key is making the physics boxes “Generate Overlap Events”. 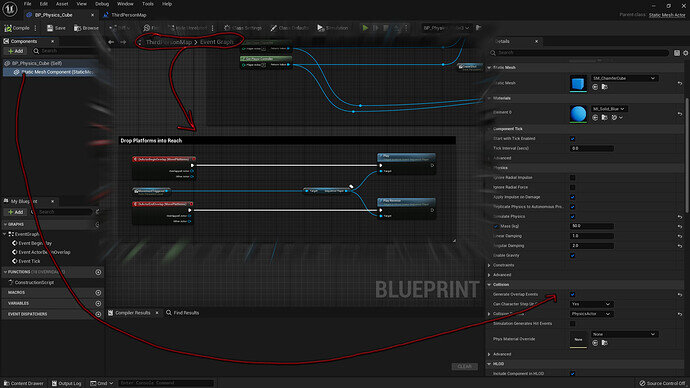 Step off the button and the platforms raise back up. That should be perfect!

Nothing but irritation today.

First I tried to link a camera angle to the pressure plate press but that was jarring and quickly became annoying so it isn’t good for something you want the player to tinker with. Also, how do I trigger the platforms every time but the camera only once? I wasn’t sure so I ditched that idea for now.

Next, I tried to make the button sink slightly after you step on it but before the platforms move. I used the timeline node and the lerp relative transform node but never got it working, just blueprint compile errors. I did make some nice tweaks to the level that I’d like to save, however…

Failed to save to ThirdPersonMap.umap
You cannot unload a level you are editing.

…prevents me from saving or even loading a different level. I checked for an extra running instance but nope. Unreal’s forum suggests this is a bug in 5.
Since I was comfortable remaking the edit I stopped trying to save and restarted Unreal. I lost nothing. I have no idea what the hangup was. Who knows. Maybe you do.

In GearsOfWar (and so many others) they call your attention to a focal point by letting the player press a button to auto-aim their camera briefly. I think I’d need some version of that for the pressure plate. Will this class teach taking brief control of the player’s actual camera?

I don’t think it covers this specifically. it focuses more on the sweeping cinematics you see. However, you should be able to target the camera like any other one.