Using the mirror tool for a fox

So after this lesson i thought as a good homework i should do my own golem thingy, and since that is a human, i thought i could just do another animal that i like, maybe foxes wont be that hard…i was really wrong again, but after hard work i managed to make the bone strukture somewhat work, i tried using only tools and techniques that have been thought.

I had pretty hard problems with the head tho, for some reason the loop cuts, suddenly jsut made the pieces unconnected, so you know when youthen want to move a line with g, and whiole the line moves, the tile next to it just doesnt anymore, and you get holes. I have no idea what those are i jsut alled them supercuts, and sadly had some.

Anyway the head does look like a wolf head isntead of a fox one, and the body looks like a human trying to imitate an animal, still i had great fun, and i am very very proud of the ears
And well i guess ill try to when we learn new stuff in alter lessions, using them to progress with this fox that looks like a dog

Edit: I think i found out what the “supercuts” where, where the surfaces sudenly wouldnt stick to each other anymore, i think this happens when you press y before pressing g or s or r, by accident, then you kinda copy the line or something. Anyways i stumbled across beeing able to merge points by pressing m. so i jsut flicked all of these loose things togheter at the head (wich was a ton) and now its way more cleaned up and looks a bit better too 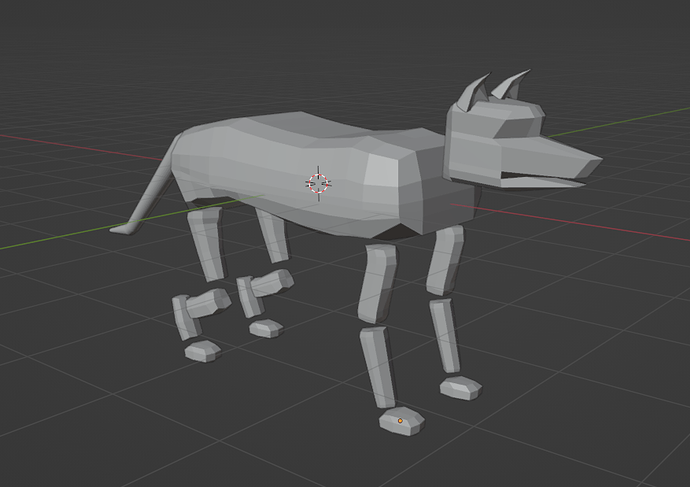 Good try at something different. Might have helped to have a reference image behind it while you worked.

Actually you are right, at first i only used a picture of a fox as reference, but having troubles with the amount of individual body parts to use, i took a picture of a fox skeleton as referance too, to get angles, it really helped a ton ^^

these where the pics i used