This is my first attempt at character sculpting and creation, i honestly had a emotional melt down making him, i had no idea i could make anything like this, or of this quality, i am not ashamed to say i was sobbing with tears i was so happy with how this turned out. i am really excited to animate him but i coudln’t wait to show him off.

This took me over a week to do, many sleepless nights, i was obsessed. Even posting this on the forum, i do this with a shakey hand, i’m so nervous to show him to anyone, terrified i might actually be good, and out of excuses not to pursue this further.

i am very curious if this character is up to snuff visually for a game. i would love to hear more experienced opinions on if i “have the right stuff” and if this is something i should be narrowing my focus into.

i am even looking for opinions on where these skills could be used outside of games and how i could market them. 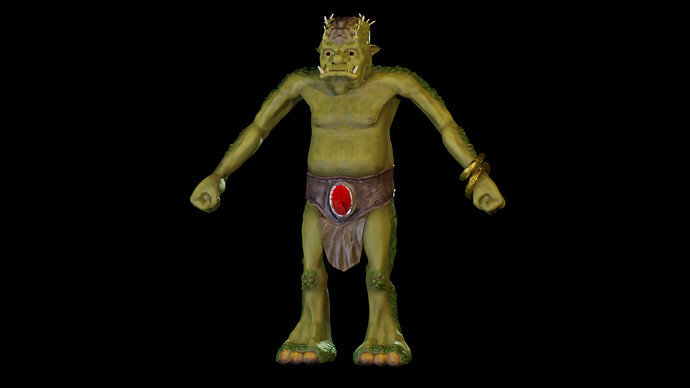 I’m liking him a lot! He’s definitely different from Ogres others have created.

My only comments, and these may have been exactly what you were going for, so please don’t take them as criticism. Most Ogres I’ve seen have more muscular bodies, especially the upper chest, arms and thighs.

That said, his feet look out of proportion, as they are huge. Now as I said, I don’t think you did these wrong, as I think he would make a very good game figure, they’re just different from what I’m used to seeing. You certainly did a very nice job of his head, hand fists, and I’m really liking the gold bracelets. Then again, I’m a woman, and what woman doesn’t like gold bracelets.

What I’d like to see is another render (or two) of Shaman Jeff from other angles, such as from the back. That’s just a suggestion, but I think it helps folks to see the “whole” figure.

Oops, I just noticed the link you provided on YouTube. That certainly gives everyone a view from all angles.

thanks for the info!, i did intend his feet to be a bit big and gangly, i wanted him a bit less intimidating and more cartoonish, frail and older, with certain areas of his body having way less muscles from less use in older age. i did start making a big muscly ogre like the pictures, but i wanted to challenge myself with something a bit harder, so i tried to make him look old. proportion wise i’m not thrilled, but i’m pretty proud i got it even looking that close, it’s my first time doing anatomy.

i really appreciate the input, it’s letting me know where people’s eyes are being drawn to.

Very nice and different. I like the non big bad muscly standard orc. The sculpting of the hands and feet look effective.
Not sure how we missed this the day it was posted.

Perhaps you could add a staff, walking stick sort of thing as an accessory rather than the axe, club things the ordinary orcs tend to get!

Especially as you have enjoyed the process, practice! Make more creatures. It gets harder, re anatomy, as the creatures get more human. Our eyes are used to what they look like so spot when something looks off, even if unsure what it is that is not quite right.

Certainly great for a first sculpt, so you have natural ability I could not say as to what would make good enough for getting work in the area. Sculpting is widely used as a specialty and can be of use for games or even things people 3d print. A 3d printing group I follow often has ‘where did you get that model file’ asked. When someone shows off a print they have done. Seems there are people that just produce things ready to print. Churn out X models a month and get subscribers. So lots of opportunities if you can be good enough and get lucky in finding a market.

that is some great info! i do intend to add on to Jeff, a staff was definitely in the mix of ideas since their hands are in fists and can be used to grip something, or possibly a smaller rod with ornaments from around the forest. so many ideas, i have difficulty picking one and doing it, i get stuck in the “could make/that would be neat” thought processes, i’ve also been trying to sleep but every time i do i start thinking about jeff’s family, so i’ve already started some basic idea’s for Greg son of Jeff, and his “lovely and completely tolerable” wife Sarah.

i do have to admit that the retopology of jeff was a nightmare after using decimate, that effected/affected? a great many things when it came to making maps, i was less than thrilled during that process and i do most certainly want to look into the proper ways of retop’ing a character for animation. What time that may have been saved, a few hours or a day retop’ing the character, i ended up losing when it came to all the maps and the stretched out uv’s, the constant going back and fixing things, while a great learning experience, was less than optimal hehe.
i’m definately big on building projects on proper foundations that you don’t have to revisit to fix later, i’m lazy, i don’t like doing more than i have to lol.

in regards to the 3D print world, this is something i’ve been eyeballing, mulling the idea of making myself available to make “prototypes” for local peoples ideas, heck i’ve even thought of making something as morbid as memorial sculptures of pets from their pictures. unfortunately it’s a monetary investment in materials and hardware i don’t have at the moment, but most certainly in the realm of possibilities in the future if things go well.