I’ve just finished the weapons section of the course and there’s two bugs that I noticed.

Any suggestions for fixing these bugs?

The key to resolving both of these is found in lecture 41, Stop Attacking Already.

If a character is in the process of attacking, but the target is no longer in range, then we need to stop the attack using the trigger you’ve set to stop attacking, much the same way as if the target has died.

My preferred solution is to do a quick check on the animation state… First, I put a tag on the Attack state with the name Attack.
Then, in the code block in Update where we decide if the target is in range or not, I add this snippet of code:

Use whatever name you have for stopping the attack from lecture 41.

This fixed the enemy behavior but its still happening on the player. If an enemy is moving away, the player slowly “jitters” toward the enemy

Here is my code: 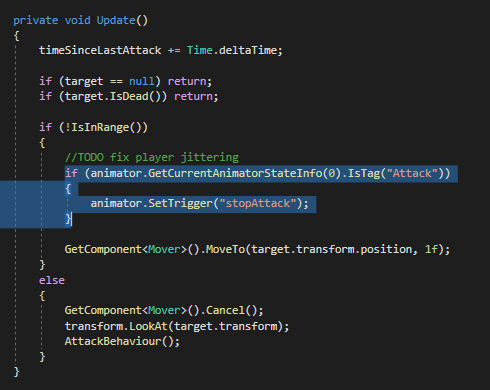 So it looks like this is the player approaching the enemy, but the enemy moving away, so it’s fluctuating between a state of shooting and not shooting, thus the “jittering”…

For anybody else reading this in the future, here is my code: