Mixed feelings about the state of my RPG Project right now. I love the level-up effect I made, and the hit effects from my arrows and pickups are pretty much how I want them. The player can now at least see their health/xp/level/enemy-hp, which really does help a lot, and the new Firebolt projectile and hit-effect look awesome.

However, there are some glaring problems that I didn’t really notice until actually playing it thru on the uploaded site. Most of them seem related to changing scenes or save/load.

TLDR
I am not sure which of these might be something addressed later and which will not, so I am continuing on with Section 12 for now. If anyone has any insight on any of these issues, I would love feedback. Otherwise, enjoy the Firebolts and LevelUp animations!

. I apologize for resurrecting this old thread. You made some good points, and there was no answer, so here goes my take on those things. Maybe it will help someone else when they get to this point.

Because the game recalculates save-data and turns XP into levels whenever a scene is loaded, it shows many annoying things every time you enter a scene: level-up and enemy-death animations, a typo I made where it increases the player’s health thru every portal. (I fixed this already)

The enemy death animation is indeed a problem. The way I fixed this issue was this.

In Heath.cs - Die() function - I’ve added a bool parameter to the function that checks if you already played the animation. If yes - if simply jumps to the last frame of the animation instead of playing it

This bool allows me to tell the saving system that the animation was played the first time, and we just want to reload the scene. Here’s how my RestoreState() looks like

For an unknown reason, if you save with ‘S,’ then kill an enemy, then load with ‘L,’ it loads positions and most things correctly, but the enemy is still dead. (not the same as Lecture #138where enemies came BACK to life on load). If you enter the scene from a portal, move around/attack/etc., then save with ‘S,’ reloading with ‘L’ brings you back to that save point. However, if you reload the game, it reloads with health/dead-enemies/etc. Correct, except that it resets the player’s transform to the portal instead of the ‘S’ save point.

I had the same issue, and it seems the “Load” functionality is a bit different than that of Play Game (in the editor). What I mean by that: the load acts as a quick load without first unloading any of the elements, while Play Game is the full “Load” since it calls “StartCoroutine(LoadLastScene());.” So my solution was to change the load code to the full coroutine, which fixed most of my issues.

My biggest issue was trying to create a cool slashing effect on the sword weapon. I tried many ways to do this, and they were all awful.

The way I made my sword slash was to parent the slash effect to the player. Since the effect you want to achieve is relative in distance to the player and its forward direction, it made sense to me, to have it there and trigger it when needed. I had to tweak the Particle System - Start Delay to get the timing right. Here’s how it looks 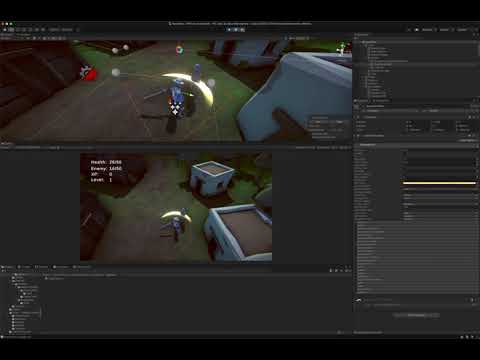 Your idea of using Trail Renderer would work just as well, but you would need to parent the effect to the sword prefab instead. That way you would use the animation/motion of the object to create the effect. I tried something similar, however, the sword was “emitting” all the time and made a trail as I was running with the sword in hand.