Working on a new game that will be an RPG with turn-based combat, something along the lines of DragonQuest or Persona 5.
The player’s movement in the world is handled through keyboard and/or gamepad not point-and-click. Not using cinemachine at this point so mouse/gamepad handle all the camera movement. I adopted all of this from YouTuber Sebastian Graves’ Third Person Controller series.
The enemy AI in the world is using scripts/concepts from RPG Core Combat Creator. Also using course’s saving system as well as progression. Since I’m using turn-based combat I had to go else and combined several different techniques from different sources (Zenva’s Turn-Based Battle System, xOctoManx’s Turn-Based Battle/Combat).
Like Dragon Quest and Persona, the main character will pick up members along the way so they can be part of any battle but also can be used within the main world. There will be some areas or quests that only one particular member will be able to accomplish so I had to be able to switch characters in the main world. I also had to be able to save each of these different character stats/progressions when they go back and forth from world scene to battle scene as well as going from one world scene to the next.
I still have a lot more work to do as like inventories, quests, and dialogues but at least I got a working combat system at this point. Need to work an audio manager as well. The characters and environment right now are just placeholders so this is the final look I’m going for.
I found the hardest thing to work on is the UI using the new input system. Not alot of resources out there to explain how to work with menu controls and stuff.
Hope you enjoy this preview. 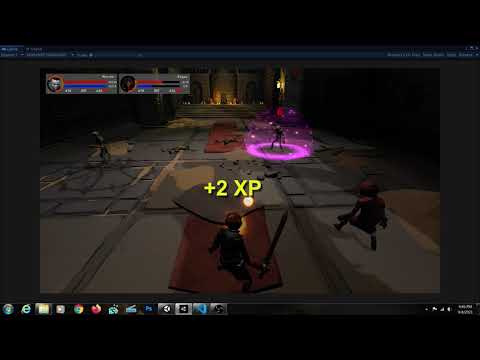 This is really cool.

Might I suggest looking into the Command Pattern instead of using Unity’s new input system, you’ll have to do a lot of work but you’ll end up with an input system of your own, which I found to be really, really helpful for JRPGs.