I thought I would try something more daring for the heck of it while playing with my simple example file and attempted to revert the base of a set of branches that remerged later.

You can see what happened: 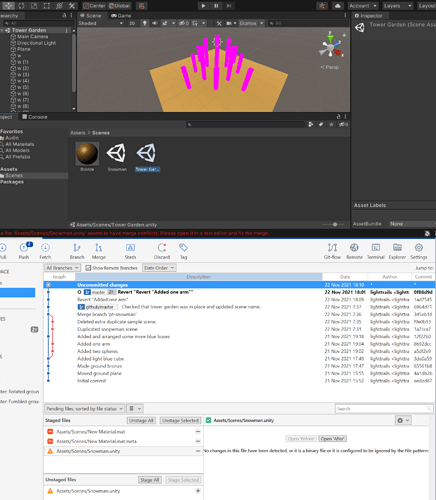 Taking a gander at why merge conflicts appeared as a result, I could guess it might be because the branch that was remerged is based on work done on the scene underlying the base branch trying to be reverted - not quite sure? (Discarding the staged files comes up with some sort of error around there being no merge to revert - but seems to still work fine.)

(I’m guessing in practice this is likely something that you can always avoid by having a “working” scene in your file before creating a branch and limiting changes within that.)

This is where it gets confusing to me. Do you see yourself breaking the repository by possibly merging?

Probably - but I’ll be honest I did not check. What i think would probably happen is: