Making this, I created a prefab with a child using the GunFlash in a Mesh Renderer first, which gave a nice thumbnail.

Then I added a particle system to that, but because of having two renderers it creates an issue: The particle system doesn’t manipulate the original mesh and so it ends up with one stationary mesh and one rotating. I didn’t care for how that could look in flight (not to mention the jerky reset at 5s of life). 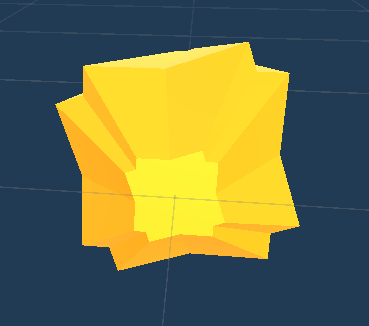 Unfortunately disabling/removing the Mesh Renderer takes away the thumbnail

Is there a way to get a nice static thumbnail for prefabs that are using a particle system to control the render?

Or would it be best to just have the renderer turned on so it has a thumbnail and then in Projectile.cs Start() just do a test to turn it off.

Or perhaps, better - use a setting in the script in case of other variants
(or invisible projectiles - they’ll never see ‘em comin’)

This might be a better question to take to the Unity Forums.

Hopefully I have it in the right place over there to get some visibility. It doesn’t seem likely it will be an issue but it makes me itch.