After a long time of developing this scene, it is finally done!
Well… sort of
Here’s it’s final Eevee form
(To put it in context: in the game the more you progress the more weird world around you becomes, it turns into abstract and anomalous riff inhabited with weird creatures, with flying cars, glowing growths, dishwashers falling from the sky(yeah), etc. Basically I tried to create a scene that technically could happen in game’s universe).

Tried to make Eevee look as good as possible, shadows and volumetrics could be better though

It was supposed to be in Cycles originally I even got one render done with it: 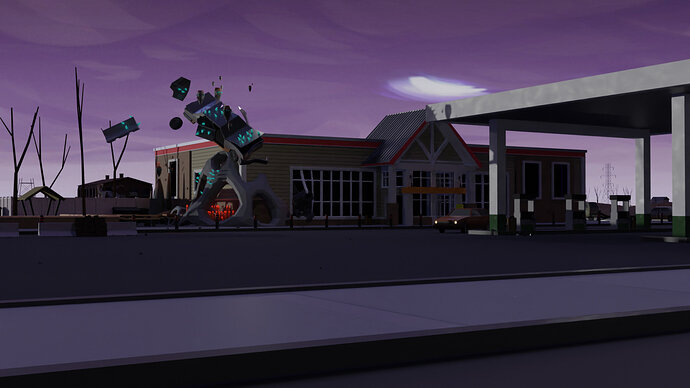 As you can see lighting works here much better then Eevee, but there’s no Volumetrics.
Volumetrics didn’t work for Cycles, when I tried to render it in viewport or final render view it took down my Video Drivers every time.

I did restore it eventually buuuuuut Cycles lighting got completely broken and didn’t display any shadows for this project, at this point I’m just glad I could make that one render.

Initially I wanted to make several renders from different angles for this scene, that idea is scratched and with it goes few unused assets, due to how much time it takes to complete it. Scratching that idea allows me to move to different projects.

In the end I really like what I came up with, what are your thoughts on it?

This is a really complex and interesting project. Congratulations on seeing it through to the end, it looks amazing!
I do have to wonder, though, what that sculpture with turquoise crystals is. I’m sure it makes some sense, but unless explicitly told, I can only speculate.

As Alexandra already mentioned, the story in the scene is difficult to read. All my attention (as a viewer) goes to the building and gas station. Then there is some mysterious going on with red and blue things.

It is a well done scene, I suspect many of us are missing what some of it is about by not knowing the game it is related to?

perhaps the station could have had lit windows? The pumps some dots of emmisive electronic numbers. However that may not suit the game theme, just an aesthetic view of the image.

So frustrating when your equipment can not keep up with your talent!

@Alexandra_Ispas
Thanks!
I didn’t realize how confusing this scene is without context

So, in the game the more you progress the more weird world around you becomes, it turns into abstract and anomalous riff inhabited with weird creatures, with flying cars, glowing growths, dishwashers falling from the sky(yeah), etc. It’s never explained directly why it’s happening, only some clues, so it’s all very mysterious.
The idea of a weird apocalypse sounded pretty cool, so I tried to depict this idea in this artwork

@FedPete
Thanks for reply!
Yeah it is a bit confusing now when I look at it. I figure it’s because of lack of context, however there might be more to it, maybe composition is off and I can’t point my finger at what’s wrong :
Oh, and I did want to focus most of attention on the Gas station and then anomalous growths, so that the viewer sees abandoned building first and then figures that there’s something very wrong with it.

@NP5
Thanks!
Yep, lack of context makes it weird .-. I shall add some to the original post
As for scene, it’s not tied to the game anyhow, just a building with weird anomalies going around it, like a scene that could have happened in the game
The building is supposed to be abandoned so lit up windows wouldn’t really suit it

Thanks again for your replies!