I am building a new computer so I can take my unreal courses and my blender courses eventually. Right now, my two computers are just too “weak”… One does not even have dedicated graphics and it would be a waste of money to buy an internal graphics card.

So I decided to build a new computer. I built my first computer and this one will be my last, so this one is my dream computer for these classes.

I have my beautiful case. It is a Corsair 750D and it is up to my mid thigh. I love it! Im buying one part a month.

Question 1 - Intel vs AMD for games dev in unreal, unity and blender stuff… I don’t want to make a mistake.

Just want to know if a 5950x and ONE 3080 is enough to have comfortable lesson experiences and future game dev. I know it’s enough for gaming but dev is different and I’m a newbie at game dev.

Okay, thanks in advance.
Jenn C.

You are in luck - I recently build myself new desktop and had similar doubts/questions so did a lot of research. Take make advice as very subjective as I’m not an expert in every detail. Most cases though we have similar requirements, so I hope you will get something out of below.

As for CPU - unless Intel will make some kind of huge comeback there is nothing better you can buy on the market then 5950x. Right now AMD has all the bases covered - both no of cores/threads and single core performance (for gamedev more cores is better then single core performance / for gaming - still single core performance is most important on CPU). I also got 5950x. It’s expensive, but for me it’s worth it especially for Unreal work. “Compiling shaders” message is not as annoying as it used to be. I think you could go with 5900x as well, which is significantly cheaper (but less cores).

In theory 2x 3080 is more powerful in comparison to 3090 aside from memory (6k cuda cores more, 4gb of VRAM less). Though it’s not that simple as other factors come in, like data exchange between cards, no. of PCIe lanes that you have available etc. And the biggest problem is how to fit 2 3080 in the case and motherboard - those are big cards, so keep that in mind. I think for rendering on GPU (CUDA/Optix) you should get better performance out of 2x 3080 vs 1x 3090. For “general” game-dev one of the GPUs would sit idle.

The “*” I put close to overkill is because I got one

. One of the few application that 3090 is not an overkill is deep learning and I dabble in that too.

For comfortable game-dev 32GB of RAM is more then enough. I don’t know what you would like to do to utilize 64 or more, unless you have some specific use case for that. And yes, single 3080 should be enough even if you get 256GB of RAM.

And for this question: “Just want to know if a 5950x and ONE 3080 is enough to have comfortable lesson experiences and future game dev”

Definitely it’s more then enough. I think that 5800x and 1 x 3070 would give you very comfortable experience. 5950x + 3080 is almost the best possible experience right now (better only would be 3090, or 2x 3080 but aside from rendering time in cycles - you will not see huge difference).

And some random comments:

I was in the similar position wanting a ‘last’ good computer. Then this supply issue came along and effectively made it pointless. By the time any reasonable chance of getting anything comes round things will have moved on. I had hoped for the 3080 with more memory.

. I would finish it with “… last computer for next 3 years”

Thank you! Love your detailed answer.

A lot of what you advised I have considered. I want a beast and you have confirmed 5950x and the 3080… So that’s my plan on that. My mobo is going to be purchased next week. I am still researching. Right at this moment, it is the ROG Strix x570-e. I know it is not top of the line for Asus, but I read it is great for working more so than gaming. I want air.

RAM – My ram is G.Skill RipJaws V. I did a lot of research and did not come by this decision quickly. Lots of choices out there. I know 128 is overkill… I just want to max it out!!

Coolers – I am going with the Noctura NH-D15S, 140mm for my cooler. I like the black. I kept tossing back and forth with that and the NH-u12A, 120mm for a while… What made my decision is that running head to head, there is very little difference in cooling, which is surprising. So it’s come down to appearance and I like the Chromax. I’m actually thinking about replacing the Corsair fans in the case for Noctura eventually. I have room to also add another intake fan or two and maybe another output. I don’t want any water in my computer. That thought just scares me. I would have nightmares of leaks…

PSU – Its a tossup between Corsair AX1600i and the EVGA SuperNova 1600w. I am leaning toward Corsair because I have a Corsair case and I like things to match if possible.

CASE – And I have to say, I love my case. It came last week in the mail and it is amazing. I may have to take a pic or two and put here. I am not really into LEDs and RGBs and all that so this case is perfect for me. Sleek is an understatement. This is just a great full ATX case. It is solid metal with magnetized dust covers. Look up Corsair’s 750D airflow edition case.

In about four months, I’ll have my parts purchased. I bought two or three blender courses. Can’t wait to take them on this new computer.

The ROG lineup is solid, even if expensive. I bought TUF X570-plus and I’m pleased with it. So with Strix I bet you’ll be satisfied (though if you want to save some money - here is the opportunity - for my use case I didn’t find anything that strix does that tuf didn’t do).

I’m not really familiar with Sabrent (it’s not available within my area), but those speeds sounds really good!

G.Skill is solid brand in my opinion. I also bought them (trident variant, the difference should be minor). They work flawlessly with 5950x.

NH-DS15S has really good reviews and seems to be one of the best out there. Just check size and mounting options. I am not sure if this is exactly this one, but I think it’s quite big (might need to mount it really high above CPU and might go far out above RAM - which would be pain in terms of any kind of maintenance or even cleaning).

Water cooling for CPUs is safe. It’s manufactured as a closed loop system and there is no risk of any leaks (or so I heard

). This is my first water cooled system and I was really hesitant to go this route. I’m quite satisfied with the choice due to efficiency and noise levels (though when the 3090’s fans start to spin up then it really makes no difference

In my limited experience you don’t need to target Titanium or Platinum rated PSU. Gold / Gold+ should be enough and are much cheaper. I went for Thermaltake Toughpower 1500W and it’s more then enough. But if you decide for AX1600i or SuperNova you will have more then enough power (possibly to power 2 GPUs and have headroom for some other stuff).

The 750D looks cool. I’m not much into cases (I put the tower under my desk :P), but the cool thing about it is that it has 4 USB slots in front of it :D. My favorite designs right now are are Lian Li. They are hard to get in my area unfortunately.

RGBs are kind of cool. I was trying to build a desktop without any RGB lights - but due to availability issues I have everything with lights… and it kind of grew on me.

Ah, btw. There are some issues with 5950x resulting in random reboots for some people (including me). Maybe by the time you build yours it won’t be an issue any more with updated bios. But in case it is - there is a simple fix of modifying your power plan and setting CPU to never go to low power mode.

Edit: I hope you get your parts in 4 months. I just watched some re-cap from CES and in the summary the guy said that both Nvidia and AMD said that they expect supply issues at least till end of this quarter.

I just recently heard of those. I was intrigued by one that was built like a desk… All the components were in a drawer under your desktop. The drawer slides in and out… HAHA… I had to do a search and could find nada on it.

On power, I want too much, for that just in case scenario… On the height level of my cooler, it’s compatible. I just need to install the ram and plug the PSU in prior to installing.

I am excited! Ordering my motherboard on Wed… In two days!! I have it in my amazon cart ready!! Come on retirement payday!

I may go ahead and order my Noctura case fans as well. I’m thinking of two 140mm fans for exhaust on the top and two 120’s for more intake on the bottom… I’m removing the HDD racks from the case as I don’t need them, and that way I’ll have room for the 120’s on the bottom if I go this route. 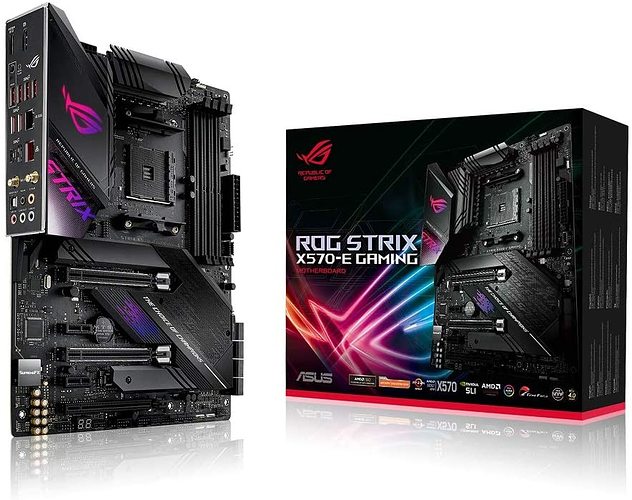 This is my tentative fan placement at the moment. I’ll probably end up replacing the Corsair fans. 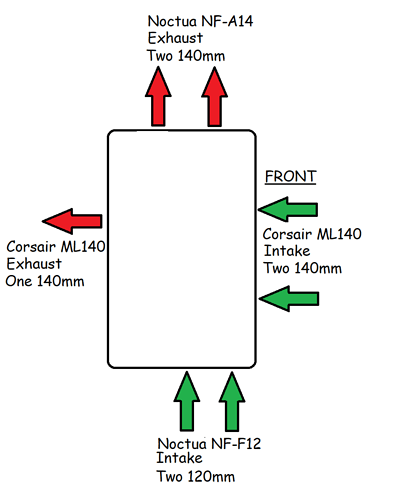