Jeff gets a Staff and a limp 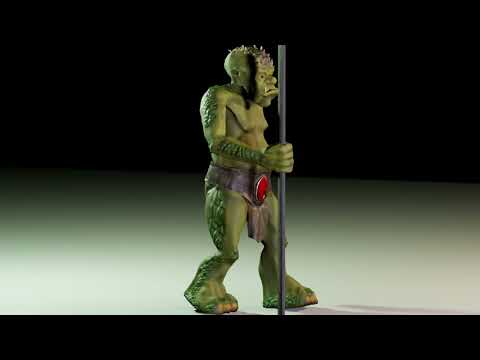 ok so i did add a simple walking staff to jeff as challenged, it’s not adorned or anything, i mostly wanted to focus on the animation.

the animation itself is pretty choppy still, i’m confident i could do it better given more time, but i want to continue on and learn about the next lessons such as maximo, but i think i’ve gotten an ok grasp of key frames, i just need to find a motion chart so i can see better where bits n pieces should be when walking, like knees, hips etc, i did what i could while limping about the house trying to figure out how to make it look more real.

the timing was a major issue, as my pc was only running at about 9-11 frames per second while trying t play the animation, so the final render looks a lot faster than intended, sorry about the spinning camera, it was also going faster than intended.

Actually a limp is fine, adds to the character! You could animate in solid view until you have it worked up as you want.

Mixamo thing is something I have avoided, not that into animation and other than a demo of walking, etc I cant see that it helps much. Far better to develop the skills to make the character do something by animating it yourself. There is virtually no use for the countless ridiculous dancing or other set clips to my mind. Ideally, what could be useful one day is easy to capture of movement oneself or a person, acting out the thing you want the character to do. Still expensive as far as I know.

yah, i was thinking of making an entire animation set for walking with the staff, some basic idle stand poses etc for export to Second Life servers to see how they fair in that engine. i rather like the idea of making my own custom animations, i have…ideas, and they’re rather specific and the timing would work better with custom versus trying to get prefab animations to work, i’m thinking more along the lines of short animation videos versus game animations at this point.

i think it would be fun to do some short skits with some basic characters and animations.