I give up (for the moment)

I knew that my mesh was going to be difficult to animate. First, I tried with Mixamo a lot, but it was impossible, it didn’t know where the neck was so the shoulders were all over the place. So after a few tries and even trying to fix it painting the weights, I thought about animating it myself with the rigify armature and have some fun. And it was working, I was pretty happy with the result so far:

But then I realized the back of the ogre was an absolute mess: 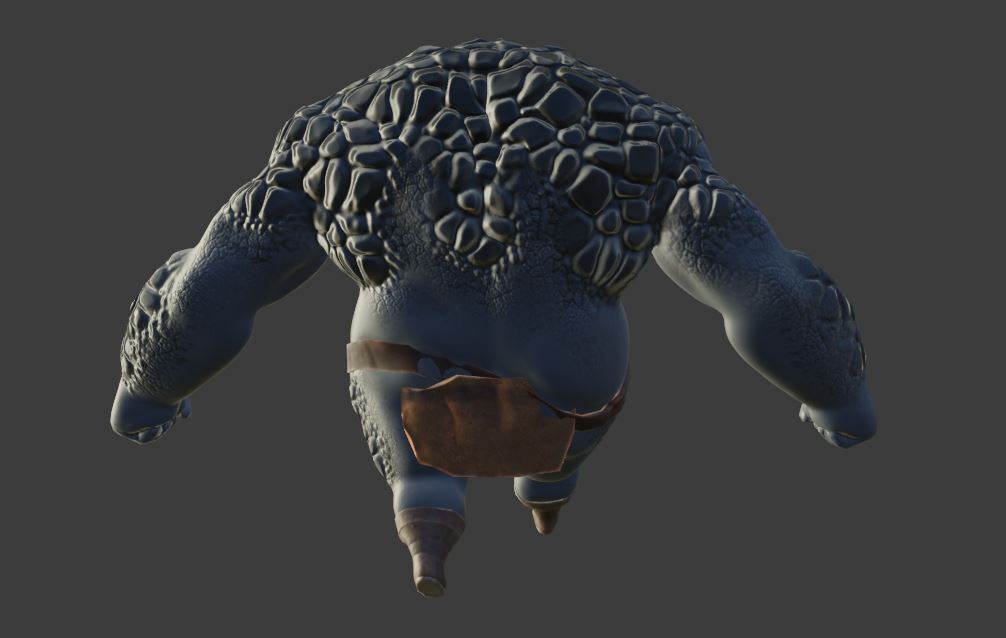 I tried to fix the weight painting, but it didn’t work. I just want the belt to stay put, but I don’t know how. I tried many things and now the buckle is stuck to the body while the belt goes on its own. I also deleted some vertex groups in the belt to keep just the ones refering to the hips, just like Grant did with the teeth and the head, but I think it was a mistake. Now I’m totally lost and I don’t know how to fix it, so I think I give up until I know more about rigging. (If anyone maybe can help, that would be awesome)

I learned a lot, anyway, and I’m really happy with the course. Probably, I’ll do the last part with a low poly character. The course is not complete yet, anyway, is it?

Cheers everyone! Thanks for reading and for the help

I think you can do it by assigning vertices of belt to a lower body bone that does not rotate.

Would under the belly and around the waist (like a thong or something?) Or would that not work?

Thank you guys! Rao’s comment put me on the right track

Great animation especially when you did this on your own.
You get high quality if you are using Maximo, but then where is the fun?
You can then also download a high-quality Orge/Orc from somewhere …

I appreciate it because you did this manually and it looks good. Like walking behind a cart … (new idea?)

So much to learn in Blender!