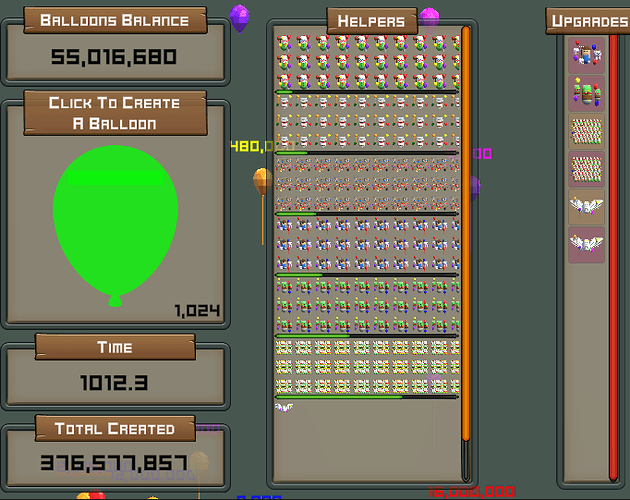 Not So Idle Balloon Clicking Game

Not endless and not very idle if you get involved!!
See you on the leaderboard?

's even got a name in this one…

Great work @EddieRocks!
It’s great to see that you decided to dive into this quest. I’m not gonna lie, I’ve been hoping to see “Balloon Clicker” for a while and you didn’t disappoint!

Idle clickers aren’t for everyone but it’s always good to expand your knowledge of different genres and try to understand what makes them tick.

I really liked the balloons that you added to the background. It’s a really nice touch that adds to that exponential feeling of progression.
If you wanted to change anything, it might be nice to increase the scroll speed of your scroll view elements, so that you can use the mouse wheel to move them up and down.
You may also want to lock the horizontal movement of the helper acquisition scroll view, and stop that horizontal bounce.

I’ve got no idea (yet) how you got such a good highscore, but I might play again later to see if I can top it!

Thanks for playing and the feedback Gary.

I will look at the scrolling bits more closely as hadn’t overly noticed when I played.

There does seem to be a tactical side to the game and I’ve yet to figure out the best way which is nice as it means it is replayable.

I am considering putting more info (helper total created counts) to see what is going on but that may not be for a while. 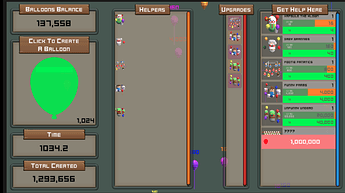 also loosing interest, as the upgrades seem to big a jump now.

Suggestions.
Finding it tricky to keep track of the upgrades, as in what i can now afford. Would be nice if these turned Green when you could afford them.
bit confused right now as to the helpers. Can i only have one of each type? it seems to be set up that i’d have multiple helpers of one type, but i can’t work out how i’d do that.
(edit,… finaly found where that it now,… sigh,…) I’ve struggled to understand the bars straight away, and didn’t know that green was was for making more. So might just need some more clarity on how things are laid out,… but that would also be something covered by a “Helper Guide” in most games of this type, so no biggie. 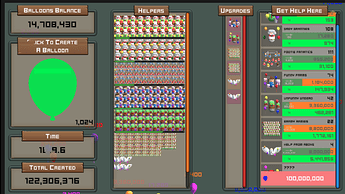 Plenty addictive :), though 100billion still feels a bit out of reach right now. Have to leave it running and come back to it in a bit :D,… which is exactly how Idle Clickers are meant to be, so job done! well done.
EddieRocks May 19, 2021, 9:55am #6

Thanks for playing Peter and for the feedback.

I did wander if it needed a Help so I may put one in.
Half assumed people had played Idle/Clickers or done the Quest so had the gist
But not sure why I had that assumption as I hadnt!
OK part was laziness/wanting to finish.

I did wander about highlighting the Upgrades but hovering over them isnt too much hassle and gives something to do other than click and makes you think which one next.

Glad you got motoring in the end

Half assumed people had played Idle/Clickers or done the Quest so had the gist
But not sure why I had that assumption as I hadnt!

It’s called the “curse of knowledge”.
Once you know something you tend to assume that everyone else knows about it too.
It’s exactly the same trap I fell into when building this quest because I was aware of their legacy and figured it was just another common genre like any other!

I have got to say, once I had worked out what to do it was really addictive and annoying like these games are at the same time. PLayed it all through my lunch break today!

and I am glad you didnt let me down and it was clown themed!

I can’t believe I missed this! Didn’t make the high score my first time out. Will have to play again

I got on the leader board. I know you’ve probably already long since moved on but one comment I would make is that I think its pretty much impossible (if not literally impossible) to get the final upgrade as the price is 96 billion, I’m not sure you can rack up that many balloons before you win.

Thanks for playing and perservering Hazel

.
I expect you are correct and I need to tweak a number somewhere to stop it appearing and then test again to make sure but as you say I’ve moved on for now but will look in to if I go back.