Few errors getting Bulls and Cows working with VS Code

Hey guys, the first problem I encounter is when I launch the Unreal Engine Project “BullCowGame” from my files I get this error message. If I hit OK and try to launch BullCowGame again it asks if I want to rebuild it and if I hit yes then the project launches fine. So I’m unsure whether this error mattered but I just wanted to include it just in case.

The second error I encounter is when I open Visual Studio Code from within Unreal Engine while working on BullCowGame I get this “Failed to parse” message.

Finally the last problem I have is when I get the C++ file and header file loaded I get the red underlines for #include which I’ve seen a few others seem to be having the same issue. The only thing I have tried so far was going back to version 1.2.2 of the C++ extension and deleting the extensions file within VS code. 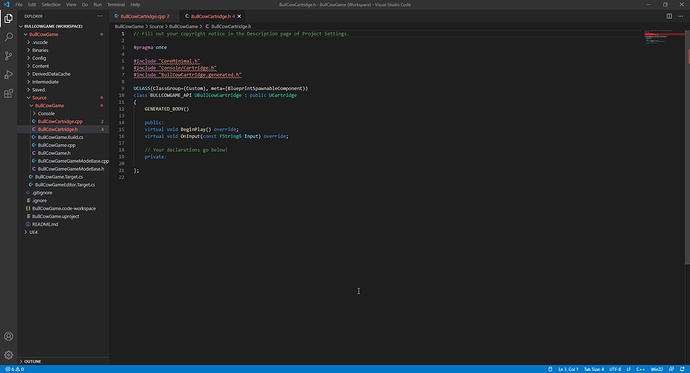 Do you use any antivirus software?

The only antivirus I use is Windows Security but I don’t think that was related to the issue.

My EpicGames file was on “read” only and after changing myself to the owner of the file and allowing “write” for my user profile it seemed to fix everything. The failure to parse and the red squiggles are gone.