Divide by magnitude of b 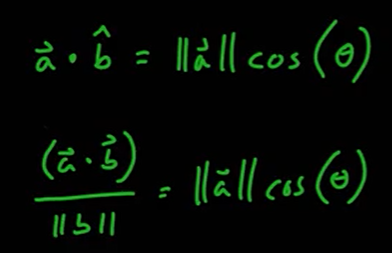 Hi @Andrew_Sadler,
You certainly could write it that way, I just wrote it this way by convention since it makes the whole thing a bit more compact and easy to solve.

You’ll actually see this a lot in math, where the same thing can be expressed in multiple different ways and there’s absolutely nothing wrong with doing things the way you suggest.

To prove that they are the same though, let’s throw some numbers in there and see what happens in both cases.

We can then solve it as:

So both options do indeed give us the same result.
From an algebra standpoint we’re really just saying that (a * b) / c = a * (b / c).
It just looks a bit different because we’re using the dot product of two vectors instead of regular old numbers.

I hope that helps clear things up for you.