As the title says, I’m not able to attach the sword script to the Fighter script located on the player. When I try Unity displays this error pop up: 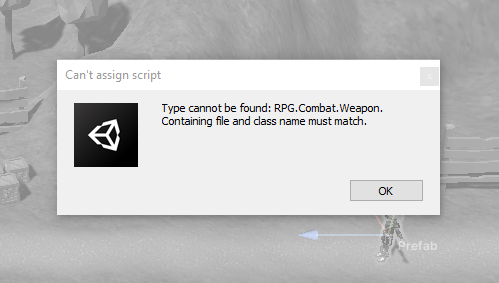 I followed Rick like a hawk, and I’m not really sure what I’m missing, and its going to be so annoying/ satisfying once it’s figured out! Can anyone help?

So for this lecture, there is no class. In script Weapon.cs, Rick informed us we are not using monobehaviour instead we were going to make a script that uses “CreateAssetMenu”.

But you still helped me figure it out, the issue was I added and “S”, weapons.cs which is incorrect.
In the script “Fighter.cs” you’re calling for “weapon”… so I re-labeled the script to “weapon.cs” and deleted the “Sword script object” from my sword folder and recreated it, and now everything works!