30 Days of Modeling and 2D Animation!

Not sure where I should put this, so I choose the Blender community!

I’m doing a small challenge two improve two things that are keeping me away from finishing a game project I’ve wanted to make for quite some time!

It’s time to strengthen my weaknesses which are those two topics; 3D modeling and 2D animation, so here goes nothing.

I started by doing the keyframes, the first and last, then I filled up the gap with other frames, at the start there were more but that made the animation look really slow and I wanted a faster movement. I deleted some of the frames and I ended up with that, I’m not nearly satisfied with it, it looks like the warrior is taking a small leap instead of taking a step which is the effect I wanted, that occurred because I deleted the wrong frames. The slice effect looks so bad, supposedly, it was a frontal slice, not an upwards slice.

I’ll redo it during the last day of this 30-day challenge. To see my improvements. 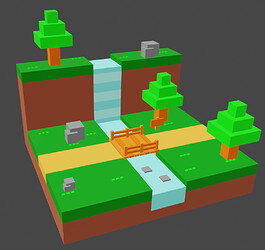 I really need to start using Blender more often, I didn’t name my cubes on time, you can imagine the mess I ended up with, I had a really hard time remembering the hotkeys and navigating through the scene, I’m just so used to Unity. I also need to start taking into consideration the scale of things, that sign was almost as big as the trees at some point, which was hilarious.

Overall, I like the scene, it could have looked better, but I’m happy with it, not as disappointed as with the animation, which is a good thing.

Looking good in a Minecraft way. Have to keep up Blendering a bit every day to keep your familiarity up!

I was trying to do something more random this time. I like it but not really, I think the cape needs more movement to make it look more appealing.

The fun thing about that sort of animation is that there’s no real follow-up or super tight key animations, I just draw semi-random stuff and it led to that.

Oh, I think what the problem is; the shadows look a little weird. 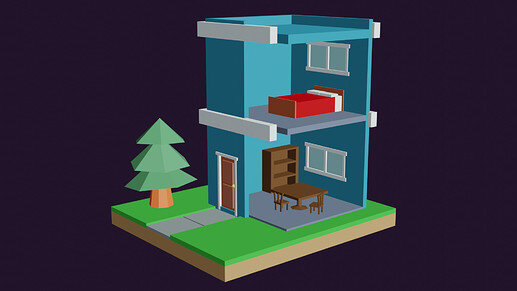 I wanted to do a more detailed house but this took way too long, I did this using only primitives, I missed extruding things, but I wanted to challenge myself into not using any box modeling techniques, so I didn’t, I learned a few things tho, especially on the size of things, that was a nice lesson. I also got a little anxious at the end, it was taking too much time, which leads me to make mistakes, next time, I’ll do it calmly, is not a race.

A bouncing ball, I wonder what it is colliding with…
The result is not that bad, but it could use a lot of improvements, the speed of the animation is also quite slow which I’m not particularly fond of, it makes the ball appear too sticky, also the Squash and Stretch effect might be better off if I exaggerate it as much as possible. I’ll probably redo this animation tomorrow. 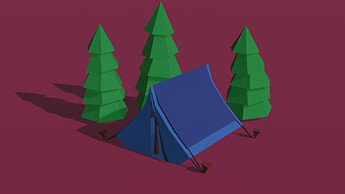 I like this one, it’s simple but it conveys what I was going for. The techniques used to make it weren’t optimal, to say the least, but at the end it worked just fine. I’m starting to feel comfortable with Blender again, which is nice, still not comfortable enough to make an entire game, but I’m getting there, step by step.

Another bouncing ball, or should I say goo. This time it is way more dynamic. I actually like this animation quite a lot, the exaggeration of the Squash and Stretch really gives a lot of life to this weird goo, the only thing that I don’t like is the proportions, especially when it splits into 2 and goes back to being a ball, you can clearly see an increase of mass. It’s kinda hard to deal with that sort of thing, I could count the pixels but that takes way too much time. 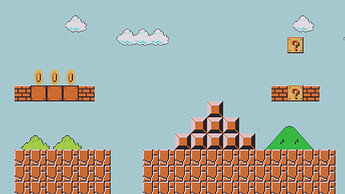 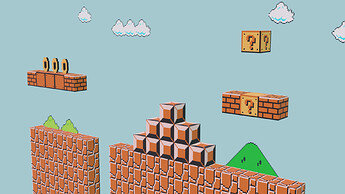 Full 3D Classic Mario!
I enjoyed this a lot. It was simple but hard to make for someone as inexperienced as me, it took me a fair amount of time to set the UVs correctly, there’s probably a better way to do that, I’ll have to research that if I want to speed up the game making process. What I enjoyed the most was making the coin, it is full 3D, it is kinda hard to see, but I promise, it is in 3D. It started with a cube, I extrude until I created the shape, it was like solving a puzzle, quite enjoyable, maybe there’s an idea for a game.

A very basic walking animation! Don’t walk in the middle of the streets kids! I’m actually quite happy with the result of this one, the squash and stretch are very subtle yet it gives a lot of personality to this shadowy character. 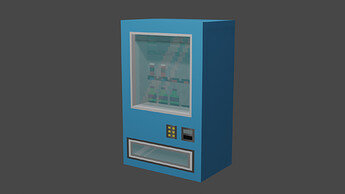 This presented far more problems than it should, I really need to plan things ahead. Originally I started with an indented cube, pretty simple, but when marking the seams I noticed something, the way Blender indents creates a diagonal edge, this can create deformations in the textures if not arranged properly, making the UV process a lot harder, so instead, I ended up with an extruded cube, creating two sections, allowing to better fit rectangular textures without any sort of deformation.

I’m learning a lot from this little challenge, even if the models and animations are quite simple.

Our shadowy character is now up for a run. It’s kinda amusing what you can do with only 4 frames of animation and poorly detailed stick figures. The head probably needs a little bit of movement. 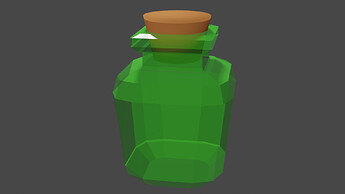 This is probably one of the laziest ones, but I did learn a lot about the bevel tool and how to use it properly, the order in which you use it matters a lot like pretty much everything in Blender.

It’s all about references. This small animation took me around 20 minutes to do, Why? Because at first, I wasn’t using any reference, then I grabbed something similar to a cube and saw how it looked when rotating it, I discover some really fun stuff, things for math nerds, but it made everything way easier. Using references really makes everything a lot simpler. 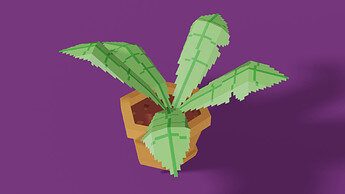 A pixel art pot! I’m not particularly fond of how the leaves look but I do like the overall feel. I just need to found a way to better import textures with alpha. I also learned a lot about UV unwrapping, like how infuriating it can be at times, but also how fun it is.

Notes:
I want to finish this challenge but I’m not sure if I’ll be able to due to my computer not being able to properly handle Blender, so maybe I’ll just stick with the animations, but I’ll try to at least do simple models.

After some days of feeling bad, I’m back!

Another walking animation, this time I used one of my favorite characters of all time! Pit, from the Kid Icarus game series. This time there’s so much more detail than in previous walking animations, I think it looks great! I used the base animation as a guide but ended up creating my own thing. 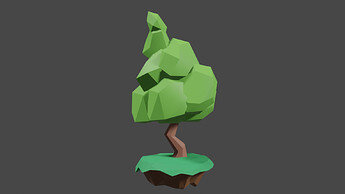 A small low poly tree on a small low poly floating island. I’m actually quite amazed by this small tree, it’s so easy to make and it gave me a great insight as to how to create better-looking low poly models in an easy and fast way.

Today I was running out of inspiration, so I decided to investigate which are some animation exercises for beginners and give those a go, same for modeling, I did learn a lot of amazing techniques and tricks that will help me. I’m also starting to feel far more confident in both my skills, I’m getting used to Blender again and start to use hotkeys like crazy.

Another bouncing ball but this time with movement in the horizontal axis, that actually changed a lot of things because the squash and stretch behave quite differently, and no, this is not me just rotating a model, I actually had to modify and create several possess for the ball. 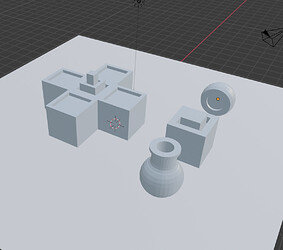 Really simple models, I decided to try Grant Abbit’s basic modeling exercises, I did learn things from this like some hotkeys and individual extruding, I didn’t know that was a thing.

This sort of animation is actually quite tricky to pull off due to the frames decreasing as the object falls, especially with pixel art of this size where there’s very little room for detail. The falling brick ended up looking ok, It could use some work, the rate at which it falls could be improved a lot. 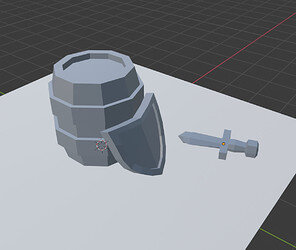 Following Grant’s basic exercises, I did learn a lot from this one. How useful the mirror tool is and how easy it allows for you to do things, boundaries, circle mesh, and many other things I usually don’t use, this was an amazing exercise.

Another falling brick! What’s really hard about this sort of animation is to properly convey the density of the brick and also achieve a nice falling speed that looks natural. The dust when it falls, I think, helps convey that the brick is quite heavy, it’s a nice addition but not 100% if I should use those sort of things or if I should be able to convey weight regardless. 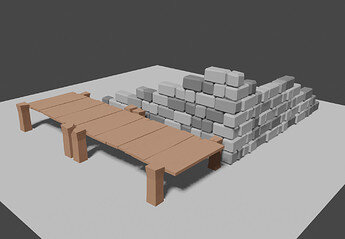 Again, following GA’s tutorials. Some planks and a brick wall, nothing fancy, but I did learn a lot about modifies, how to apply them correctly, a little bit about topology, and really neat ways to create multiple objects in easy ways.

A tiny flour sack falling. When dealing with tiny things, it is actually quite hard to convey falling speed, acceleration and things like those. I’ll probably do the same as with the brick, redo this tomorrow with a bigger scale before I go deep into some of the more complex animations. 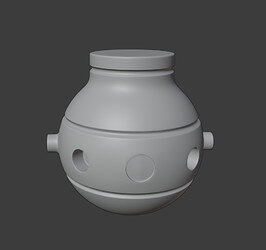 Nothing fancy, just a little bit of hard surface modeling. I learned about supporting loops and some new add-ons that will certainly make everything easier. This is nothing fancy, but it was a nice exercise.

A jumping flour sack! I have no idea what this is, but it sure took long. This is the most I’ve spent on an animation during this challenge, almost took 1 hour between drawings, sketches, and other things, but this made me realize which my flaws are, which are a lot to even list them here. 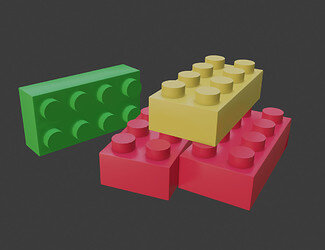 LegoBlocks1184×910 72.3 KB
Lego blocks, nothing fancy. I’m starting to get used to Blender, the tools, add-ons, and more importantly the thinking require to do this. For this little piece I would have done each circular thing one by one instead of just making one and then mirror it until reaching the amount required.
2 Likes