This is just the first little section. It was looking a little grey so… Went a little Jurassic themed - UE4 bot was getting a little tired of the grey walls. screen shot and this is a video clip 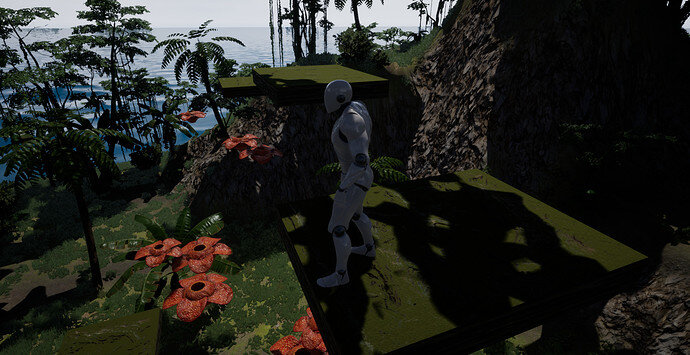 I would probably play that with an objective and maybe something else added in, plus a story (and of course a few hours more at least of play time). Looking good.

Thank you Very Much. It looks a lot better now, but honestly I am not trying to spend to much extra time on the first 3 sections… I am very much interested in bringing the final lesson into a real Game on Itch and Game Jolt. So in a few days if someone in interested. Let me Know. I am Serious and am seriously looking for an Incredible team to work with. https://www.youtube.com/watch?v=QdhXlGXsggk this is what it looks like before Menu’s. play testing with my son. You can see the lag on the Other machine how it slows down the Frame Rate of the Platforms… I am assuming because the server can only go as fast as the slowest connection or in this situation slower PC.

Considering, the network code is working quite well. But, yeah it needs to be unlocked from the fps. Each computer should probably have its own fps limit reachable.

I would think delta time, etc should get the game to be the same on every computer. Then just update the characters through the network instead of everything that moves.

In other words, if you have the game running the same so the platforms are at the same point on two very different computers at the same time while offline then they don’t need to be kept in sync via network.

If they need to be kept in sync via network, then it might need to be done so that the moving platforms get speed adjusted to match the slowest or something like that. That should improve the bad hitching of them as well.

Wish I could help further but already have things taking up my time that need to be done. Just randomly pop on here now and then.

ut, yeah it needs to be unlocked from the fps.

ok yeah I get what you are saying. See i thought that Delta Seconds might fix the problem. But maybe the last part of your message is really what is going on. Neat thank you very much for you time.