This is a little tricky to pull off, this is all about vector math.

The line of code above won’t work. It will give you a vector instead of a float, so you can’t compare that. It’ll return a very, very weird vector, because the mousePosition returns the screen position, not the world position, so you have to convert it first.

To convert your mouse position to world position you’ll have to use something similar to this:

Camera.main.ScreenToWorldPoint() will convert your mouse position to world position, as the name implies.

After that is a matter of calculating the distance between the two vectors, to do that Unity has a very useful and simple method: Vector2.Distance, you can use this but keep in mind that is not optimized, it uses the square root operation which you want to avoid like the plague, well, in this case, it wouldn’t be much of an issue since the game is simple.

If you want to calculate the distance without using that operation you’ll need to do some calculations.

Subtracting two points (or vectors) will give you the vector between the two, a vector tells you a direction and also a distance (better known as magnitude). 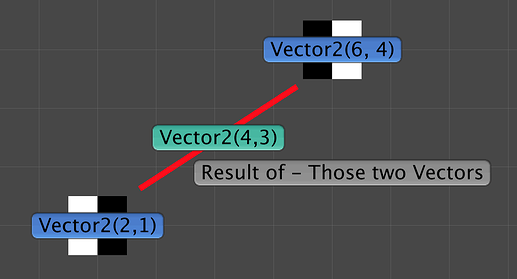 This might look a little confusing and convoluted compared to using Vector2.Distance, but it’s much better performance-wise.

Thank you so much! I was looking all over online and I couldn’t understand or see it. You explained this very well, my only thing is for paddle.Position it says that Vector2 does not contain a definition for Position, do you know why that would be?

Oh, that was just an example, you can change that to transform.position or any variable that holds the transform information of the paddle.